Increasing effectiveness of the weapon selected by adding attachments

The Workstation is an interactive object in SCP: Secret Laboratory which allows players with a Weapon Manager Tablet to modify their weapons.

Workstations are large, table-like structures which are used to store and interchange accessories for the various weapons in the facility. A Weapon Manager Tablet is required to use the Workstation.

They are found throughout all four major zones of the facility in varying densities and in different rooms. In total, there are 12 workstations across the facility:

All the attachments are split into three different categories: Sights, Barrel Extensions and Other attachments. A weapon can have each of these customized, though only one of each category can be equipped at a time.

Sights change the sights of the weapon to the preference of the player, and are often aesthetic changes only. There is an exception to this in the Epsilon-11 SR, where its latter two Sights options swap out traditional sights for Telescopic-type sights, which remove most of the peripheral around the scope itself in exchange for greater magnification.

Barrels often change up the core mechanics of the gun significantly, either by increasing damage, fire rate to maximize firepower, to decreasing recoil to make consistent shooting less disrupted. Shot loudness can even be altered, which in turn effects the perception of SCP-939's echolocation-based vision to either reduce range of detection with less sound and vice versa.

Other attachments typically fall to any attachment which does not augment either the barrel or the sights, such as a flashlight on the gun to illuminate dark rooms to prevent a dreadful combination of SCP-173 and the blackout feature of SCP-079. Laser sights also allow for significantly decreased shot randomness, and even simple quality of life attachments such as the Ammo Counter exist to keep tabs on clip size and reserved ammo without checking the inventory.

A Workstation as it appears in the Open Beta v7.0.0 changelog. 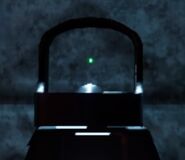 The Collimator on the USP. 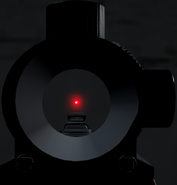 Sniper Scope sight.
Add a photo to this gallery

Retrieved from "https://scp-secret-laboratory-official.fandom.com/wiki/Workstation?oldid=8393"
Community content is available under CC-BY-SA unless otherwise noted.