Throughout the various versions of SCP: Secret Laboratory, there was various content that went unused, cut, or became legacy only.

All of these items were replaced by one of the current items or removed entirely. Some of them were Unity store assets.

These are all keycards that were either removed or replaced with newer versions. The janitor keycard was used in the old customization menu, but a different version was used in-game.

This is an older version of the current Epsilon-11 SR model.

The appearance of the Micro H.I.D. prior to Megapatch II. Its range was much shorter and it did not have ability to be canceled/charged, it could only be fired once.

According to Ava, an image of SCP-2521 is used as a placeholder asset for the F1 menu to show the layout in the editor, it doesn't appear in-game.

SCP-012 is an SCP whose containment cell appears in SCP: Secret Laboratory in the Light Containment Zone, the SCP itself does not appear however.

SCP-372 is an SCP whose containment cell appears in SCP: Secret Laboratory in the Light Containment Zone, the SCP itself does not appear however.

SCP-457 is a legacy SCP in Secret Laboratory, which appeared in very early versions of the game. This SCP and old SCP-106 shared the pictured above model.

SCP-294 is a legacy SCP in Secret Laboratory, which was a piece of furniture in the now-removed cafeteria room in the Entrance Zone. Coins and the cup were likely meant to be used with this SCP.

SCP-079 had been removed prior to Megapatch 1 and interacted with things by hacking them. Hacking time would vary depending on what was hacked, with some things taking up to 30 seconds. After hacking a door or tesla gate, SCP-079 would open up a menu that gives him options to interact with was hacked. SCP-079 would then use the number keys to interact with it. Pressing 1 would close and open doors. Pressing 2 would lock the door, but only if SCP-079's special ability was available. SCP-079 would use the WASD to turn the cameras. Using the mouse scroll wheel he could zoom. This version of SCP-079 had no map. This version of SCP-079 had no generators or AP, but could instead be killed by being shot.

In the alpha versions of SCP SL, SCP-079 could only interact with cameras. He also had a map of HCZ on his screen. He could change cameras by click on dots on the map. This was the only way to change cameras. He could also only look around HCZ. SCP-079 would use WASD to turn the cameras.

Prior to Scopophobia, SCP-096 would have to be looked at for a certain amount of time before becoming enraged. It did not have the ability to see targets through walls. It was forced to break doors that were closed and was one of the shorter SCPs. The old model has been replaced with a much taller and detailed one. The F1 box has also been replaced with new art.
Legacy SCP-096 moved at 4.7 m/s while docile and ran 12.36 m/s while enraged.

Previously, the shirts for Class-D had "Class D" written on the back in white. That has since been removed. There were also several models for female Class-D intended to be used for the game's customization system at one point. There was also another male model that had a larger body type. 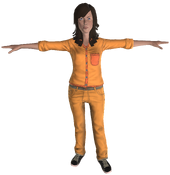 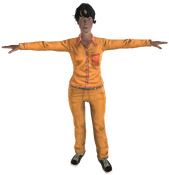 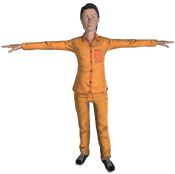 In the past, Chaos Insurgents had transparent gas mask lenses. The lenses have since been changed to be a solid dark green.

In Discord, the left image pictured above will appear whenever a player who is playing SCP:SL is a spectator. Its model was used as the ragdoll for when players died in very early versions of the game. The model was a Class-D ragdoll.

There were female, MTF and Chaos Insurgency, and male Class-D variants of SCP-049-2 made at one point. Only the Class-D male model is currently used.

An older version of SCP-268's model that was shown on Patreon.

SCP-106's model does have jacket, it doesn't appear to be used in-game however. There also appears to be no texture for the jacket either.

In older versions of the game, there is a customization system where player can choose between two characters to play as: D-55240, "Jan Kalous" and D-34910, "Charlotte Richer" who starts with a Janitor Keycard. Currently D-55240 is the only model used in-game.

The old system of searching through filing cabinets which would net you a random item. After the cabinet was looted, it could no longer be looted by another player.

Instead of a wheel, the inventory used to be a rectangle. The information on items would appear below the rectangle.

The Chao Insurgency's spawn vehicle used to have a more military appearance at one point. It has since been changed to a smaller vehicle.

SCP-096 had an unused attack animation where it presumably grapples onto a human and smashes them repeatedly.

This is an unused Micro H.I.D. model.

In earlier versions of the game, there was an option on the main menu to play tutorial levels. These levels used the tutorial class to show the player how to play the game.

There is an unused achievement called "Roasted", which could be obtained by surviving a hit from a tesla gate as an SCP.

Retrieved from "https://scp-secret-laboratory-official.fandom.com/wiki/Unused/Cut/Legacy_Content?oldid=8725"
Community content is available under CC-BY-SA unless otherwise noted.