"A single red pill capable of instantaneously curing any affliction. Such a wonder drug is irreplaceable — think carefully before use.

-Item Description" SCP-500 is one of the SCPs in SCP: Secret Laboratory, which can be consumed by the player to fully restore health and cure status effects.

SCP-500 is a small plastic can which at the time of writing contains forty-seven (47) red pills. One pill, when taken orally, effectively cures the subject of all diseases within two hours, exact time depending on the severity and amount of the subject's conditions. Despite extensive trials, all attempts at synthesizing more of what is thought to be the active ingredient of the pills have been unsuccessful.

When SCP-500 is used, the user must wait 1.2 seconds for it to be consumed. After it is consumed, SCP-500 instantly heals the player to their maximum HP and removes all status effects. It also gives an approximate 12 second regenerative effect that heals approximately 36 HP.

Multiple instances of SCP-500 can spawn in one of the four to eight locked pedestals (Bulletproof Locker №7), which are located in 10 possible places across the Light Containment Zone and Heavy Containment Zone. These pedestals can only be opened and closed by keycards with both containment access level 2 and checkpoint privileges, such as the Research Supervisor, MTF Cadet or higher access keycards.

It can also be obtained by putting adrenaline in SCP-914 on “fine” or any other medical items on “very fine.” 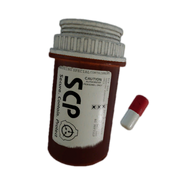 Animation that plays when using SCP-500.
Add a photo to this gallery

Retrieved from "https://scp-secret-laboratory-official.fandom.com/wiki/SCP-500?oldid=8753"
Community content is available under CC-BY-SA unless otherwise noted.