"A humanoid composed of an anomalous jet-black substance. Contact means certain death, or supposedly an equivalent of such. Presume you’re never safe whilst 106 looms.

-Steam Store Page" SCP-106 is one of the SCPs in SCP: Secret Laboratory, which can walk through doors, teleport to a set point and send targets to his pocket dimension.

"SCP-106 appears to be an elderly humanoid, with a general appearance of advanced decomposition. This appearance may vary, but the “rotting” quality is observed in all forms. SCP-106 is not exceptionally agile, and will remain motionless for days at a time, waiting for prey. SCP-106 is also capable of scaling any vertical surface and can remain suspended upside down indefinitely. When attacking, SCP-106 will attempt to incapacitate prey by damaging major organs, muscle groups, or tendons, then pull disabled prey into its pocket dimension. SCP-106 appears to prefer human prey items in the 10-25 years of age bracket."

SCP-106 spawns in Heavy Containment Zone at the bottom of SCP-106's containment chamber.

SCP-106 is easily recognizable from a distance due to its loud, unique sounding footsteps.

SCP-106 can walk through almost any form of door and glass window in the facility, only excluding doors which serve only as props.

SCP-106 has the unique ability of teleportation. Holding tab will display 2 options, one creates a "portal" (hole with a plus sign) while the other allows SCP-106 to teleport to the portal if it has been placed (hole with 2 arrows coming out from it).

SCP-106 has a unique attack, which injures and teleport humans in close range to his Pocket Dimension by clicking on them. SCP-106 has a 2-second cooldown on successful hits.

Once the Alpha Warhead explodes, players caught by SCP-106 will not be sent to the Pocket Dimension and will instantly be killed instead.

Players teleported to the Pocket Dimension are presented with eight possible hallways to walk into. Six of the hallways will kill the player instantly, the other two will teleport the player to SCP-106's containment chamber. Servers can change the number of hallway exits and randomize which hallways are the exit, which change every time someone escapes.

SCP-106 can be re-contained using the "femur breaker" located in 106's containment chamber, located in Heavy Containment Zone. One player is required to enter a small alcove in the control area, after which they will die. Another player is then required to press a button on the opposite wall. After being pressed, ten to fifteen seconds of screaming will be broadcast over the entire facility, there is no way to cancel this. Afterwards, SCP-106 will be recontained.

Despite having the second lowest health out of all the SCPs (650 HP), SCP-106 can arguably take the most bullets. This is due to the fact that it has a high bullet resistance, usually taking only 2 points of health per bullet. The only sources of damage not affected by this resistance are non-bullet sources such as the Micro HID, Tesla Gates, and Fragmentation Grenades.

Images of the icons that SCP-106 can use to make or use a sinkhole. 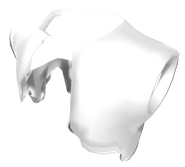 SCP-106's unused jacket model.
Add a photo to this gallery

Retrieved from "https://scp-secret-laboratory-official.fandom.com/wiki/SCP-106?oldid=8773"
Community content is available under CC-BY-SA unless otherwise noted.