"An extremely slender, frail-looking humanoid. It hides its face for a reason. Simply peering at it will induce a state of unstoppable rage, in which it massacres anything around with its immense strength. Running is futile. Don't even peek.

-Steam Store Page" SCP-096 is one of the SCPs in SCP: Secret Laboratory, which will slowly walk in a docile state until it becomes enraged by being hurt or having its face looked at by a human.

"SCP-096 is a humanoid creature measuring approximately 2.38 meters in height. Subject shows very little muscle mass, with preliminary analysis of body mass suggesting mild malnutrition. Arms are grossly out of proportion with the rest of the subject's body, with an approximate length of 1.5 meters each. Skin is mostly devoid of pigmentation, with no sign of any body hair.

SCP-096's jaw can open to four (4) times the norm of an average human. Other facial features remain similar to an average human, with the exception of the eyes, which are also devoid of pigmentation."

When docile, SCP-096 can hold Right Click on a closed door to lean up against it, causing its crying to become near silent.

SCP-096 will become enraged when looked at or when shot at by humans. Once enraged, SCP-096 will move slower for 6 seconds before gaining its enrage buffs.

Anyone that shot or looked at SCP-096’s face will become a target. SCP-096’s rage will last for 15 seconds, plus an extra 3 seconds for each additional target. Targets are made visible by markers only visible to SCP-096 (even targets wearing SCP-268 will be visible).

Each active target SCP-096 has will increase his Hume Shield by 200. There is no limit to the amount that can be gained.

While enraged SCP-096 can do the following:

After the rage state ends, SCP-096 begins to calm down and moves slowly for a few seconds. SCP-096 will then enter a short cooldown phase before he can enrage again.

Once SCP-096's rage wears off, his Hume Shield returns to 500. If SCP-096 takes no damage for 10 seconds, its Hume Shield will slowly regenerate at 2 Hume Shield per second.

Previously, SCP-096 would have to be looked at for a certain amount of time before becoming enraged. It did not have the ability to see targets through walls. It was forced to break doors that were closed and was one of the shorter SCPs. 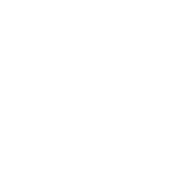 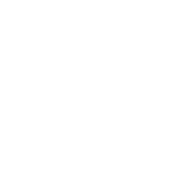 Effect that appears on SCP-096's targets.

SCP-096's unused grapple animation
Add a photo to this gallery 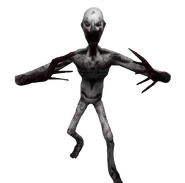 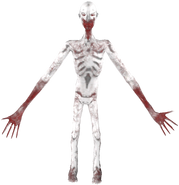 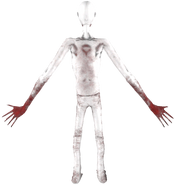 A render of legacy SCP-096 featured in an update for v1.1.0.
Add a photo to this gallery

Retrieved from "https://scp-secret-laboratory-official.fandom.com/wiki/SCP-096?oldid=8778"
Community content is available under CC-BY-SA unless otherwise noted.