SCP-049-2 is one of the SCPs in SCP: Secret Laboratory, which can attack nearby players to kill them.

"SCP-049-2 instances are reanimated corpses that have been operated on by SCP-049. These instances do not seem to retain any of their prior memories or mental functions, having only basic motor skills and response mechanisms. While these instances are generally inactive, moving very little and in a generally ambulatory fashion, they can become extremely aggressive if provoked, or if directed to by SCP-049. SCP-049-2 instances express active biological functions, though these are vastly different from currently understood human physiology. Despite these alterations, SCP-049 often remarks that the subjects have been "cured"."

SCP-049-2 spawns in when a recently deceased player is revived by SCP-049.

SCP-049-2 instances attack with the left mouse button with an attack wind-up speed of 0.2s, with a 1s cooldown on every attack. Every successful hit deals 40 damage. The attack can also destroy glass windows. 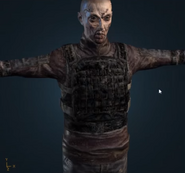 Retrieved from "https://scp-secret-laboratory-official.fandom.com/wiki/SCP-049-2?oldid=8779"
Community content is available under CC-BY-SA unless otherwise noted.