24
The Logicer is a weapon in SCP: Secret Laboratory which serves as a LMG-type weapon and serves as a standard issue firearm for the Chaos Insurgency.

The Logicer spawns only on Chaos Insurgents and will not naturally spawn anywhere in the facility. However, a Logicer is able to be created in SCP-914 with an Epsilon-11 SR on '1:1' or 'Fine', and the MP7 on 'Very Fine'.

The Logicer has high damage per bullet, the highest rate of fire, and the largest magazine size out of any other weapon in the game.

The only downsides to the Logicer are its high recoil, no attachments, and players operating the gun cannot aim down-sights. It also only deals half damage towards SCPs. 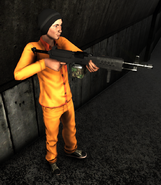 The Logicer being held by a Class-D

Shooting and reloading animations for the Logicer.
Add a photo to this gallery

Retrieved from "https://scp-secret-laboratory-official.fandom.com/wiki/Logicer?oldid=8759"
Community content is available under CC-BY-SA unless otherwise noted.