Contains SCP-914 and closes after decontamination

The Light Containment Zone is one of the four major areas in SCP: Secret Laboratory, which serves as the area where Class-D, Scientists, SCP-173, and SCP-914 will spawn. After 11 minutes and 45 seconds have passed, the zone will begin the decontamination process.

Above each doorway in the Light Containment Zone is a 4 digit code with two characters on top and two on the bottom, allowing for any passerby to identify the room on the other side of a door without needing to open it. Each code is representative of each kind of unique location and each generic one as well, presenting separate parts such as two hallways with different numerical designations to keep them different from each other.

There are currently 14 unique types of these codes:

This room is the gateway to and from the Heavy Containment Zone. There are two checkpoints found within this zone, each connecting to either elevator system A or B, respectively.

A keycard with checkpoint access, or operation by an SCP is required to open the checkpoint up. As with all checkpoints, the doors will remain open for a few seconds before closing after a few warning beeps.

Above the checkpoint, a there is a monitor counting down to Light Containment Zone's decontamination.

The airlock is a red-lit room with two doors on each side and a small dark side-room. Upon pressing either button, the inward doors will toggle between one opening and the adjacent door closing. The smaller side-room serves little purpose other than to hide in.

The bathrooms are located off the side of a low-ceiling hallway by a single door with a "WC" sign overhead. In the hallway, a medkit may possibly spawn next to the door as seen above. When going inside, the bathroom consists of separate sections men and women.

In the male side, there is a chance for a keycard to spawn on the ground. There is also a chance for a COM15 pistol to spawn on the sink, as well as being able to hold another keycard. In the women's side, there is a chance to find a keycard on the sinks or on top of the toilet. Both sides can provide only two types of keycards, either Scientist or Janitor keycards.

The armory is connected to the main hallway by a tiny room that a Scientist can spawn in. From this antechamber is a locked door which requires Tier 1 armory access to open. It contains two workstations and weapon manager tablets, an MP7, a P90, a COM15 Pistol, three flashbangs and grenades, and some 9mm and 5.56 ammo magazines.

The spawn location of all Class-D players. There is nothing of direct importance in this area as it simply leads into the zone proper. In the far back of the room, the two winning pieces of artwork from the SCP:SL 2018 art contest can be seen.

The office is organized into an arrangement of desks with computer monitors, phones, and other utensils on top of each. A Scientist keycard always spawns within this room, but it will be randomly distributed onto one of the sixteen possible desks. A Standard locker can possibly spawn next to the left of the door and up to two wall mounted medical lockers may spawn along the right wall.

The Garden Chamber is a hallway room, which on one side divided to the hall by glass, contains three plots of dirt, filled with plants. The side adjacent to the greenhouse space contains a small room that has the chance to spawn a standard locker, wall mounted medical locker or bulletproof locker.

Unlike the neighboring Heavy Containment Zone, Light Containment has only one playable SCP that uses these as a spawn point, with all of the chambers having little to no access requirement to open and explore.

SCP-173's main chamber is accessed via a staircase. Before entering this chamber, there is a small room at the top of the staircase which has a chance for a COM15 pistol or bulletproof locker to spawn inside.

Inside the main containment area there is an inaccessible door to the right and a balcony to the left with a control room on the upper level. SCP-173 will spawn in its containment chamber with a short timer before its large blast door can be opened. Afterwards, it can be manually opened and closed without any form of clearance.

SCP-372's containment chamber consists of a small room that has a chance to contain a locker andor a medical locker on the right wall. There is also a chance of a COM15 pistol spawning in the glass containment unit in the center of the room.

SCP-914's containment contains SCP-914 and several shelves of static items. The room itself is locked behind a large blast door which requires a Tier 1 containment chamber access to open. 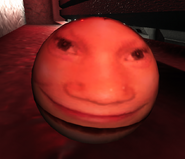 The current "Hubert ball", found using noclip in the LCZ air vents.
Add a photo to this gallery

Retrieved from "https://scp-secret-laboratory-official.fandom.com/wiki/Light_Containment_Zone?oldid=11392"
Community content is available under CC-BY-SA unless otherwise noted.