"Let there be light!

-Item Description" The Flashlight is an item in SCP: Secret Laboratory, which used to shine a light in front of the holder.

It has unlimited power and illuminates the area in front of the player, similar to flashlight attachment to weapons. The flashlight can also help players see SCP-173 in blackouts caused by SCP-079.

The Flashlight is an item spawn found in Standard Lockers.

When processed through SCP-914 on Fine, the Flashlight has a chance of becoming a Flash Grenade.

A Class-D holding a flashlight. 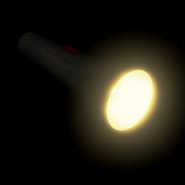 Old inventory icon for the flashlight.

The flashlight's appearance when dropped.
Add a photo to this gallery

Retrieved from "https://scp-secret-laboratory-official.fandom.com/wiki/Flashlight?oldid=8748"
Community content is available under CC-BY-SA unless otherwise noted.