The Epsilon-11 SR is a weapon in SCP: Secret Laboratory, which serves as a highly modifiable, fast firing assault-type weapon.

The E-11 SR is used by MTF Lieutenants and Commanders, and can be found in two of the facility's armories. The rifle spawns in either SCP-049's armory or the Warhead Silo armory. Additionally, it can be created by upgrading other weapons in SCP-914.

The E-11 SR has the third-highest rate of fire amongst all weapons, and is one of the most powerful weapons in terms of damage. The E11 SR has by far the most attachments, with 15 attachments (including "none") and 125 unique combinations of attachments.

Shooting and reloading animations for the Epsilon-11 SR. 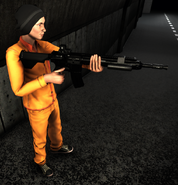 The Epsilon-11 SR being held by a Class-D

The Epsilon-11 SR in a weapon locker.

The old Epsilon-11 SR's model when held and aiming.
Add a photo to this gallery

Retrieved from "https://scp-secret-laboratory-official.fandom.com/wiki/Epsilon-11_SR?oldid=8756"
Community content is available under CC-BY-SA unless otherwise noted.