"Inmates kept within the bowels of the Foundation sites as lab rats; test subjects at the mercy of the Foundation’s cruel practices. Escape from your confines and rebel against your imprisoners — by any means necessary.

-Steam Store Page" Class D are one of the five human classes in SCP: Secret Laboratory. They spawn in at the beginning of the round in Light Containment Zone. Their goal is to escape to the Surface and survive while working with the Chaos Insurgency.

"Class D personnel are expendable personnel used to handle extremely hazardous anomalies and are not allowed to come into contact with Class A or Class B personnel. Class D personnel are typically drawn worldwide from the ranks of prison inmates convicted of violent crimes, especially those on death row. In times of duress, Protocol 12 may be enacted, which allows recruitment from other sources — such as political prisoners, refugee populations, and other civilian sources — that can be transferred into Foundation custody under plausibly deniable circumstances. Class D personnel are to be given regular mandatory psychiatric evaluations and are to be administered an amnesiac of at least Class B strength or terminated at the end of the month at the discretion of on-site security or medical staff. In the event of a catastrophic site event, Class D personnel are to not be terminated except as deemed necessary by on-site security personnel."

Class-D spawn in the Class-D Cells in Light Containment Zone. They can be identified by their black beanies and orange clothes.

Class-D do not spawn with any items.

Their main goal is to escape the facility and avoid any other hostile faction. Chaos Insurgents will cooperate with Class-D to help them escape.

For a Class-D win scenario, at least one Class-D must have escaped and all Foundation personnel and SCPs must be killed.

Class-D do not spawn with any ammunition.

In older versions of the game, there is a customization system where player can choose between two characters to play as: D-55240, "Jan Kalous" and D-34910, "Charlotte Richer" who starts with a Janitor Keycard. The shirts for Class-D also had "Class D" written on the back in white. Currently D-55240 is the only model used in-game.

Jan Kalous as he appears in-game. 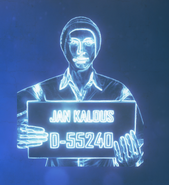 Screenshot of Jan Kalous from the old customization system.

Grayscale image of Jan Kalous' mugshot as it appears in Devlog #6 on Hubert Moszka's Channel.

Appearance of a Class-D's hat during Christmas 2018.
Add a photo to this gallery 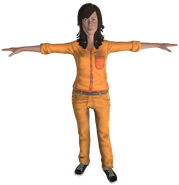 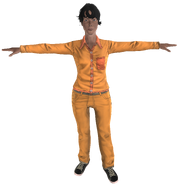 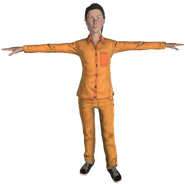 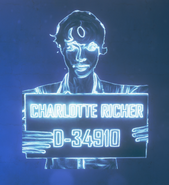 Screenshot of Charlotte Richer from the old customization system.

Ditto, but it's Charlotte Richer. 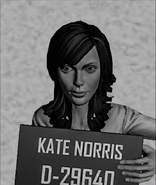 Image of 5 D-Class, (named from left to right) Unknown male, Jan Kalous, Charlotte Richer, Claudia Meyer, and Kate Norris. These D-Class were likely planned early on for the customization system. (Image and info from Devlog #6 on Hubert Moszka's channel)
Add a photo to this gallery

Retrieved from "https://scp-secret-laboratory-official.fandom.com/wiki/Class_D?oldid=8771"
Community content is available under CC-BY-SA unless otherwise noted.