"Once a mere splinter cell force and now a formidable military power, yet still but a shadow of their former Foundation employers. Your primary objective is to purge the facility of Foundation personnel and seize the “assets” that are deemed to serve the best interests of Delta Command, your elusive overseers.

-Steam Store Page" The Chaos Insurgency are one of the five human classes in SCP: Secret Laboratory. They spawn in waves throughout the round, with the additional chance to spawn at the start of the round instead of Guards. The Chaos Insurgency is tasked with rescuing Class-D and killing all Scientists and MTF, but can remain neutral towards SCPs.

"In 1924, the SCP Foundation formed a covert special task force, known only to the O5 Council, codenamed the "Insurgency." The leadership of the Insurgency was comprised of members of MTF Alpha-1, the Red Right Hand, famed for their loyalty to the O5 Council and the total secrecy of their origins, identities, and operations. The Insurgency leadership was supported by research, security, and retrieval personnel, all taken from Foundation ranks.

Chaos Insurgents spawn in waves similar to the MTF. They also have a chance of spawning in the beginning of the round, replacing the Facility Guards. They can be identified by their gas masks and green camouflage.

Their goals are to rescue Class-D and kill all MTF and Scientists. They can choose to remain neutral towards SCPs. There is no Chaos Insurgency victory, but a Class-D victory can be won through the Chaos Insurgency.

Any Class-D or Disarmed Scientists that escape the facility will respawn as a Chaos Insurgent.

A Chaos Insurgent as they appear in-game.

Image of in-game character info for the Chaos Insurgency. 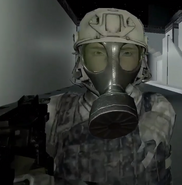 Earlier version of the gas mask that had transparent lenses.

A Chaos Insurgent without a gas mask.

In-game screenshot of the vehicle the Chaos Insurgency spawns with.

Front and back of the Chaos Insurgency vehicle.

Old version of the Chaos Insurgency's Vehicle.
Add a photo to this gallery

Retrieved from "https://scp-secret-laboratory-official.fandom.com/wiki/Chaos_Insurgency?oldid=8777"
Community content is available under CC-BY-SA unless otherwise noted.