During the event of April Fools of April 1, 2019, SCP: Secret Laboratory was given a patch to change large portions of the content to joke around with the players for the holiday. 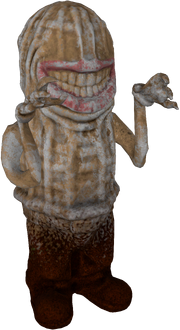 SCP-173 was changed to a model which resembles the "This Pleases the Nut" meme, being a picture of a peanut with large lips and teeth smiling. The model used riffs the concept, with the lips having a second row of teeth, the lips specked with blood and being more of a menacing grin as a result. Mr. Nut also has crude arms attached to its sides, as well as short legs at the bottom which do not move.

When Mr. Nut killed a person, the sound of their neck being snapped would be replaced by a low fidelity chuckle, presumably by Mr. Nut. 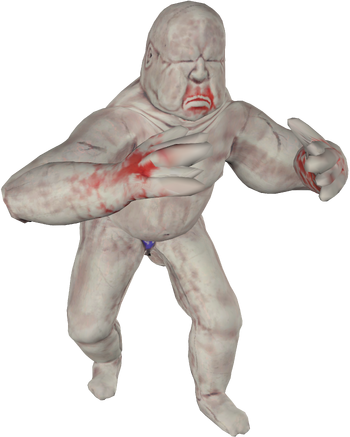 SCP-096 had its player model changed to be a more grossly obese version of SCP-096, as well as having its voice heavily decreased in pitch.

Class D personnel were changed during the update to lose their head, only retaining their beanie as a result. Their eyes were also present, always gyrating frequently. Upon spawning in, the message below the "You Are D Boy" reads:

"This meme is kinda dead, meh"

Scientists had their model changed during the update so that their lower half was fine, but from the hips to the center of the chest the model began to come in onto itself, with everything above the fold effectively shown as an inside-out scientist.

Each of the MTF classes had their names changed. Their heads were also absent, only leaving a helmet.

Chaos Insurgency was left relatively unchanged, with their heads gone with their gas masks being the only thing left of their head.

When the Alpha Warhead was first started in a match, the CASSIE system would play an edited version of the typical warning about the Warhead going off. In this case, it was a parody of John Denver's "Take Me Home, Country Roads", which was most notably featured in advertisement of the controversial Bethesda game Fallout 76.

Retrieved from "https://scp-secret-laboratory-official.fandom.com/wiki/April_Fools_(2019)?oldid=8535"
Community content is available under CC-BY-SA unless otherwise noted.